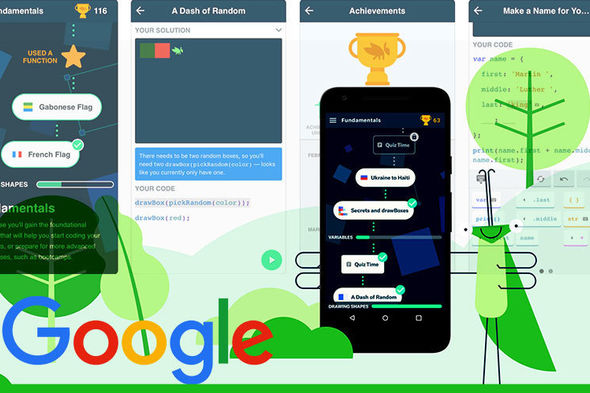 From programmable LEGO robots to mobile apps like Hopscotch, there’s no shortage of games and toys designed to get children interested in computer science. But when it comes to adults, the options to learn how to code start to look a lot less like fun and a lot more like classwork.

Over the past nine months, Google has been trying to change that through Grasshopper, a mobile game meant to teach adults the basic principles of coding. Although five thousand people have already graduated from Grasshopper’s JavaScript Fundamentals course while the app has been in testing, the search giant is revealing it and making it publicly available for the first time on Wednesday. The game is launching for iOS and Android out of Area 120, Google’s internal workshop for experimental projects.

When developing Grasshopper, Google focused on three main barriers making it hard for adults to learn to code: Time, access, and money. The first point is particularly vital — when Google asked thousands of U.S. adults why they had given up on coding, the top answer was that they ran out of time, says Laura Holmes, founder of Grasshopper and a senior product manager at Google. Turning coding lessons into something more like a smartphone game makes them easier to fit into a busy schedule, she says. “Many of our users actually find spare moments when they’re sitting on the couch unwinding after work or in bed at night,” says Holmes. “They’re using those moments to learn how to code.”

Most people interested in learning how to code are hoping to do so to further their career, says Holmes, citing a survey of current Grasshopper users. It’s not difficult to understand why: LinkedIn’s list of the top job skills for 2018 was filled with abilities like mobile development, cloud computing, and data engineering, and in 2017, PayScale and CNN listed “mobile app developer” as the best job in America.

Google’s puzzle game won’t turn you into a programming wiz overnight. But by introducing players to the basic fundamentals through JavaScript, it may help them decide whether coding is a viable career switch for them. That’s why Google is also partnering with Coursera and LaunchCode to help players who want to continue pursuing computer science after completing the game discover appropriate courses and programs. The suggested classes should feel like a natural next step after finishing Grasshopper’s curriculum, according to Holmes. “We say, ‘Here’s the next one that fits well with what we’ve taught you,’” she says.

The Grasshopper app itself looks simple and self-explanatory. When setting up the app, users will be able to choose how often they want to practice coding; Grasshopper suggests playing daily, but offers other options like every other day, twice per week, or no reminders at all. Like many games designed to teach coding, the puzzles themselves involve inputting lines of code to reach a goal. In the demonstration I saw, the player was asked to enter the correct code in order to complete an image of the French flag, with each string of code contributing more color to the picture. Grasshopper also quizzes students occasionally to make sure they’re comprehending the principles being taught in lessons. A friendly grasshopper named Grace — named after computer industry pioneer Grace Hopper — encourages players along the way.

Of course, Google is far from the first company to game-ify code lessons, nor is it the first to make such programs available on smartphones. Apps like Hopscotch and Lightbot may be positioned towards children, but anyone can use their puzzles to learn the basic principles of coding. Codecademy offers free courses in popular languages like JavaScript, Python and Ruby, whereas Google’s app specializes only in JavaScript.

But Holmes says Grasshopper isn’t trying to replace services like Codecademy. Instead, it aims to provide an introduction for those who may feel too intimidated to try coding in the first place. Part of the inspiration behind Grasshopper comes from Holmes’ own experience studying computer science at Stanford University. “You run up against a lot of these things as an adult, often being told that it’s too complicated, or you just don’t know where to start,” she says. “We’re trying to be the launchpad.”